It’s been nearly 58 years since The Beatles played “All My Loving” on “The Ed Sullivan Show” and left their gigantic, omnipresent footprint on American culture. The 1964 appearance was when the 73 million viewers learned who George Harrison was, and today, the two remaining Beatles greats pay tribute to the group’s lead guitarist, on the 20th anniversary of his passing.

Sir Paul McCartney posted a touching tribute today, commemorating 20 years since Harrison passed away from lung cancer, at the age of 58.

McCartney posted a photo with Harrison on his Instagram, taken by McCartney’s late wife Linda. The photo showcased McCartney with his iconic left-handed bass playing, alongside Harrison playing his flower-decorated guitar with the caption: “Hard to believe that we lost George 20 years ago. I miss my friend so much. Love Paul.”

The band’s drummer, Ringo Starr, also posted a tribute on Instagram, of the duo happily smoking cigars together. Starr wrote: “Peace and love to you George I miss you, man. Peace and love Ringo.”

Harrison’s Entrance To The Beatles

Harrison and McCartney had a longstanding friendship, and McCartney even considered Harrison his little brother. The duo met at school, a few years before McCartney and other late Beatle John Lennon were part of a band called The Quarrymen in 1958, which later evolved into The Beatles in 1960.

McCartney recalls Harrison’s audition as a fresh-faced 14-year-old that Lennon almost didn’t want in the band due to his young age. At the 7th year mark of Harrison’s death, McCartney told “Uncut” back in 2008, “He pulled out his guitar and played ‘Raunchy,’ and that was it – he was in the band,” McCartney said. “He was a bit too young, almost out of the age range for us, a little too baby-faced, but he was just a great player.”

Luckily, they made the right decision, as Harrison himself made a big splash in the worldwide ‘Beatlemania’ wave. 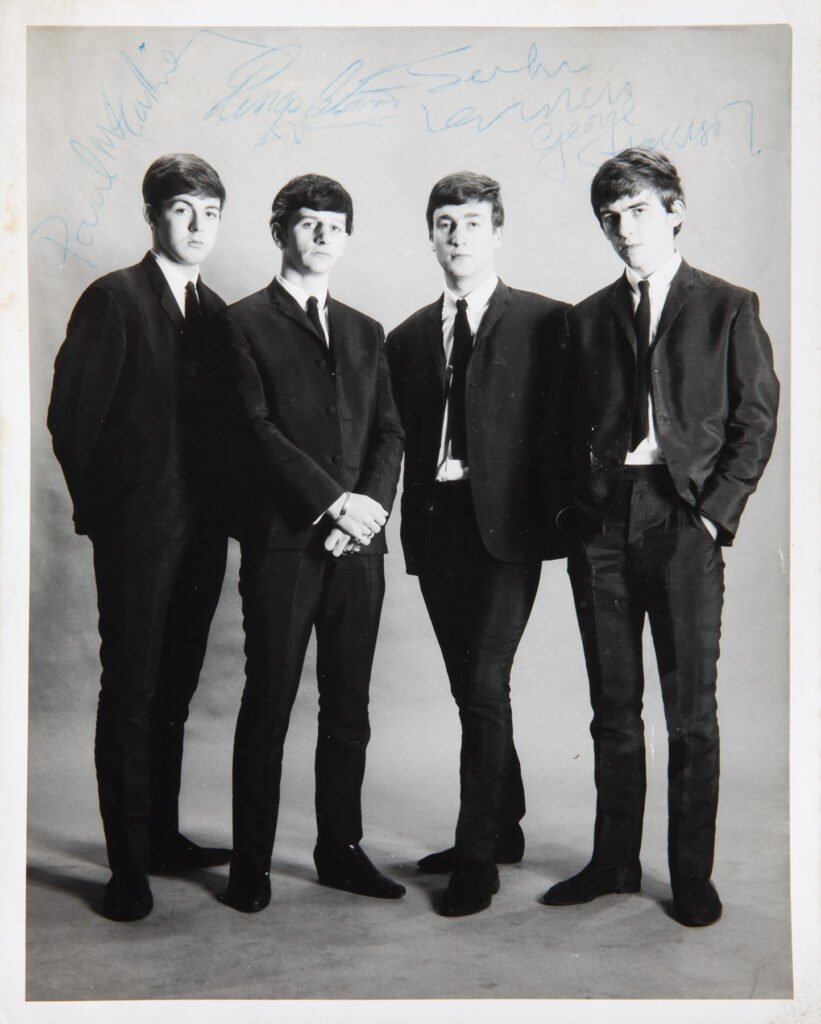 Harrison leaves his own pivotal musical legacy, aside from the band’s total contributions.

Through the influence of Ravi Shankar – an Indian classical music guru – Harrison brought the inventive sounds of the sitar to 'The Fab Four's' repertoire. The sitar – an Indian-style, gourd-shaped instrument with 20 frets and metal strings – led the band to new and meditative sounds, starting with 1965’s “Norwegian Wood.”

After deeply focusing on the sitar for two years and studying transcendental meditation, Harrison returned to his roots and reengaged with the guitar. He penned the iconic, widely-covered tune, “While My Guitar Gently Weeps,” for 1968’s “The White Album.”

Known for being the quiet, lonely one within the foursome, Harrison didn’t need to be loud to contribute. The calm musical force solely wrote 21 other songs for the band, including “Taxman” and “Here Comes The Sun.” Harrison’s “Something” is also considered one of the most-covered Beatles songs of all time, with at least 200 iterations of the track.

Harrison’s fans are grateful to be reliving these moments through McCartney and Starr’s posts and through a new Disney+ feature. A fan-studded following left their condolences on the posts, flooding them with thousands of comments.

Many fans wrote about their excitement to be put right in The Beatles’ shoes, and in the band’s 1969 recording session conversations, through the new Peter Jackson-directed, Disney+ three-part series, “The Beatles: Get Back.”

One fan wrote: “Just completed watching Get Back this evening, oh what a magical journey you all had.”